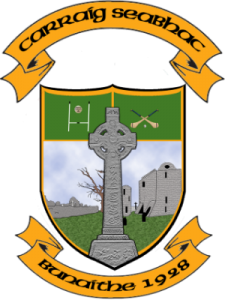 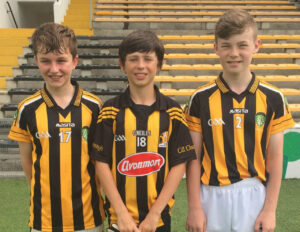 Our Under 14s got their league campaign back on track with 2 wins over James Stephens and Cloneen. The boys were very impressive in both and this should set them up at least for a playoff to make the league final.

Well done to the Under 12s on reaching the B final of the Tullogher tournament. They played Ballyhsle Shamrocks in the final in Tullogher last Saturday.  They weren’t helped by having the U10 Go Games and Schools Camogie final on the same day and just came up short, but well done on a fine performance in a very competitive tournament.

Well done to the 3 Carrickshock boys in helping Kilkenny win out the Inter-county football blitz for the 4th year in a row last Friday. The two Kiljenny teams blitzed Offaly, Wexford and Laois on the way to meeting each other in the final. Somehow the Carrickshock boys (Padraig Lennon, Shane Fennelly, Sean Moore)  got split in the Kilkenny East – West divide, but all played their part in helping KIlkenny to victory.
Share