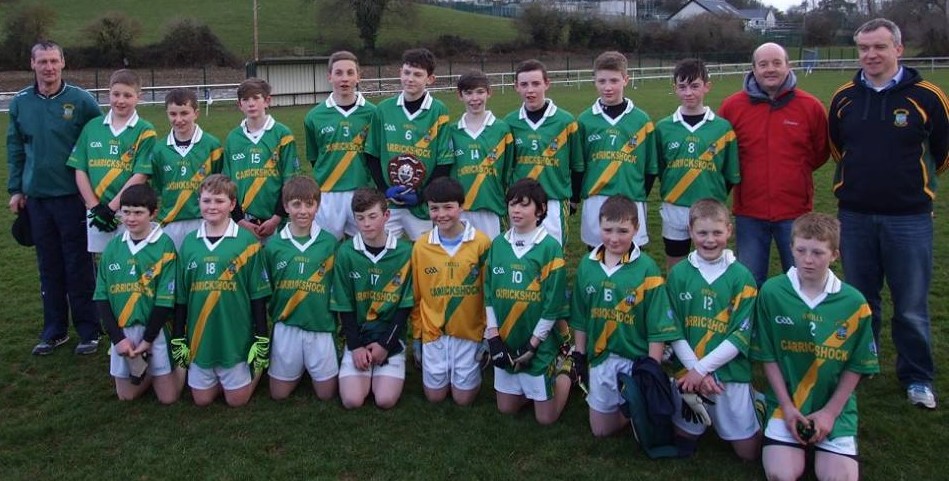 Our Under 14 footballers put on a superb display in their league final against Barrow Rangers in fine conditions last Monday (28th) Thomastown. This bunch of players had lost 4 different finals (hurling & football) narrowly in the past 2 years and weren’t going to be denied this time. Eoghan O’Neill set the ball rolling when he converted his own penalty after being hauled down while bearing down on goal. Carrickshock dominated the scoreboard for the rest of the half – an Adam Long goal after a brilliant move from Josh Dineen, a Pádraig Lennon point, a couple of goals from Eoghan, then 2 clinical strikes to the net from Oisín Doyle. The game may have looked over and done but playing into a strong wind in the 2nd half the boys weren’t taking any chances. Once Eoghan slotted over a point after a flowing move all the way from the backs, they sensed this was going to be their night. More points from Oisín and Adam, and goals fom Eoin Crowley, Shane Fennelly and Luke Hudson well and truly sealed it. The scoreboard makes it look like a forwards show, but the backs played a huge part as well. Stephen Neville and James O’Shea marshalled 2 very tricky corner forwards especially in the 1st half; Josh Treacy and Jack McGuirk tackled brilliantly on the wings and Jack rattled one off the crossbar after a brilliant attack; Oisin Carroll and Luke lorded it down the middle and Patrick Hickey in the goal pulled off a couple of outstanding saves when called upon. Ryan Grace made a difference when he came in, and was unlucky not to get on the scoresheet. The younger players Darragh Dwyer, Sean Moore and Andrew Fitzpatrick all did their bit in what was a wonderful team effort. Well done boys!
The Panel: Patrick Hickey, James O’Shea, Oisin Carroll, Stephen Neville, Josh Treacy, Luke Hudson, Jack McGuirk, Padraig Lennon, Eoin Crowley, Darragh Dwyer, Oisin Doyle, Shane Fennelly, Josh Dineen, Eoghan O’Neill, Adam Long, Andrew Fitzpatrick, Ryan Grace, Sean Moore, Mason Byrnes.

Well done to our Under-16 Hurlers who started their league campaign on the right note with a win over Tullaroan on Wednesday (30th). It’s a busy time for the Under 16s, they play Tullogher on Monday (4th) in Hugginstown, and O’Loughlins next Monday (11th) in St. John’s Park

The minor hurlers start their league campaign when Graignamanagh visit Hugginstown this Thursday evening (7th) at 6.30.

Carrickshock play Dunnamaggin in their 1st game of the 2nd Team League this Tuesday (5th) in Hugginstown at 6.30, then visit Mullinavat on Sunday at 2.0.

A big thank you to all who supported the Greyhound Night on Saturday night, and to all who got to the track to turn it into a great social occasion. Hearty congratulations to the big winners of the €1000 Sweepstakes: Ann-Marie Phelan, Dunnamaggin and Ann Power, Lawcus, Stoneyford. There were plenty of other winners too:
Philip Dunne, Jerpoint Church – Springhill Hotel Dinner for Two
Larry O’Shea, Lismatigue – Voucher for Goatsbridge Trout;
Thomas Maher, Lismatigue – Bottle Brandy;
Heidi Bolger, Chapel View Stoneyford – Bottle Bushmills;
Seamus Farrell, Owning – Bottle Jameson;
Johnny Brownrigg, Aghaviller – 2 Bottles Wine.
And if your name didn’t come out of the hat, hope you made a few quid on the dogs.
And finally a word of thanks to all the local business who sponsored the Race Card – your support is very much appreciated.