Reflections on “The Safety Pin” 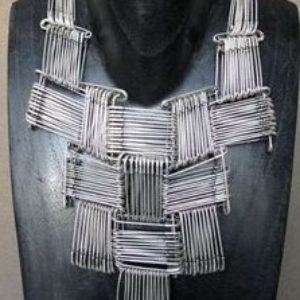 My mother had an obsession with safety pins all her life. Wherever she went she had several safety pins pinned in he clothes.

We came to the conclusion that she was always afraid of the elastic going in her knickers. Now there’s a garment you don’t hear much of these days. They were mostly made of a heavy interlock material and were mainly pink and blue. I worked in drapery and when a lady came in to buy one we always showed her a small size, so as not to offend her, but it was mostly large and extra strong we sold. Small wonder that anybody lost their chastity at all!

Mam was gifted with great hands and she stitched pink lace on the legs. This she did with great patience and then held them up for us to admire. We had to stifle giggles.

But back to the safety pin. They were invented by Walter Hunt, an American mechanic in 1849. Not realising the value of his invention, he sold his idea on to a Mr. W.R.Good for a very moderate sum. The latter went on to make millions.

These days the safety pin is not as widely used with new materials like Velcro, Vilene and Wonder Web, but like my mother, I will always have a sneaking respect for the safety pin.