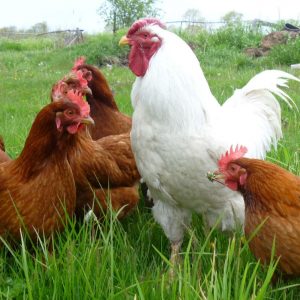 Did he really have in his plan

To have them caged up in small spaces,

Or was this an idea of man?

Did he really mean hens should be able

To scratch and to pick on the ground

To preen and to ruffle their feathers,

And be able to look all about.

Did he really think that Pat Porker,

Would be able to root with his snout

And to walk in and out of his pig sty

And be able to roam all about.

And did the thought ever strike Noah,

As the animals went two by two,

That maybe in the near future

But wait, you say, all this is progress

And that it’s been clinically tried,

Daily being sprayed in their eyes.

So maybe in the near future,

Man will listen and stand,

And think did God in his wisdom,

Really give man a free hand.