The People of Stoneyford take to the streets! 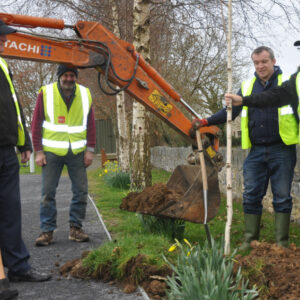 Not only was there a huge turnout for the litter-pick, there was also another group of Stoneyfordians planting trees around the area. Twenty-five trees, 10 Silver birch and 5 White beam, were donated by the Parks Department of Kilkenny County Council. The Silver birch were planted around the playing field and the White beam were planted at the Health Centre.

Planting the trees proved to be a more difficult prospect than anticipated. Fortunately Eddie Walsh arrived with his digger and made the

There was a third group planting a Copper Beech Hedge close to the Picnic Area in front of The Community Hall, Catriona Roche, Johnny O’Grady and Pat McKee were the hedge planters.

The work, which began at 09.00, finished at 13.30 and everyone went home tired, hungry and very satisfied.

We can all look forward to enjoying the fruits of their labours as the hedge and trees mature over the coming years.